Angel n : a spiritual being that is believed to be much more powerful than a human. Angels are composed of ethereal matter, thus allowing them to take on whichever physical form best suits their immediate needs. In Christian, Muslim, Jewish and other theologies an angel can be one who acts as a messenger, attendant or agent of God.

In Christian religion and theology an angel can also be a member of the ninth and lowest order of the nine-fold celestial hierarchy this is a ranking which comes directly below archangels.  A fallen angel is often classed as a devil, like Satan himself; whereas a guardian angel is classed as a human guide or protector.  Angels are commonly represented by a figure with wings and wearing a long white robe.  They are also sometimes depicted wearing halos whichemanate from the angels' head in a glorious wreath of light, serving as a symbol of divine wisdom. Angels do not die or age, they are immortal, created by God and existing since the Creation.  Generally they are accepted as being the guardians of souls.  Although angels are generally divine, they have been shown to be fallible and prone to sin, particularly pride.  One of the most notable examples of this being Satan and his fallen army.

Angels can take on a variety of different forms.  In Ezekiel 1:16-21, Isaiah 6:1-3, and throughout the book of Revelation they are described as taking on not only the appearance of men but many fantastical forms.  A notable example was the angel who took on the appearance of a burning bush.  The image of an angel with wings tends to symbolise the spiritual nature of the being.  The purpose of the wings being to allow the angel to travel through the ether as well as being a symbol of divine authority.

The word angel is thought to be derived from the Greek word angeloi which means "messenger".  Throughout the bible it is generally seen that the will of God is usually imparted or carried out by angels.  When God is tired the angels bring about all manner of destruction including plagues and famines.  But at the same time it is the latter, who also bring hope, safety and peace to those in God's favour. See also: Angel Magic, Angelolatry, Angelology, Angelophany, Archangels, Celestial, Celestial Bodies, Celestial Hierarchy, Celestial Light, Dionysius the Areopagite, Fallen Host & Grigori. 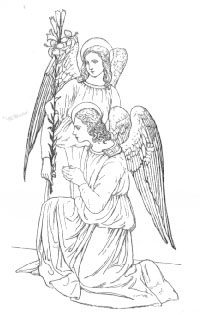 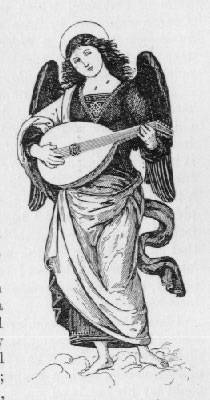 The middle picture Angel and apparitions on film, was reproduced with kind permission from Rev. Dr. Theresa Jodray.  The photograph was taken by her husband James in an old cemetery in downtown Fairbanks, Alaska.